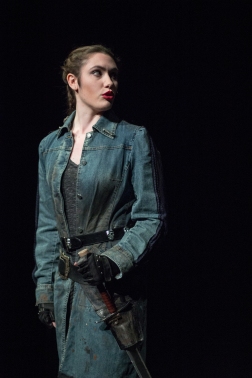 In her post “Red Lip, Classic(al)” theatre blogger (and my senior thesis student) Morgan Anderson considers two specific costuming choices in Queen’s School of Drama and Music’s recent production of Macbeth — lipstick for the women and bare chests for the men. These choices might not be so curious ordinarily, but in this production, the weird sisters were played by men and all the other characters played by women. Morgan’s discussion seeks to unpick a phrase in the director’s notes for the production that asserts that gender in this production “is left up to the pronouns” in the unchanged script. Focusing on the physical characteristics denoting ‘male’ witches and ‘female’ apparitions, Morgan concludes that the remark that the gender is in the pronouns is disingenuous. The body as object speaks — in this case quite loudly.

What I want to do here is to share some of the conversations that Morgan and I have been having about the production and to consider what is revealed if cross-gender casting is brought into conversations with ‘the real.’

Director (and my School of Drama and Music colleague) Kim Renders has been quite plain that her intention in casting women in male-marked roles in Macbeth is to create opportunities for female students to speak those lines, to embody those gestures, and to do some sword fighting. These are laudable real-world goals that expand the experience of these young actors and enrich their training. All good. What I am interested in however (as usual) is what these real elements do when they are transposed (or resist transposition) to a fictional world.

Actor bodies are always real objects in the mechanics of theatricality. Real bodies are the foundation upon which a fictionalized life is ventriloquized. When Kenneth Branagh becomes a bleach blond Hamlet, the actor body is (mostly) silently subsumed into the role. This is what Hamlet looks like. Sometimes however there is a (what shall we call it?) gap or short circuit in this equation. Sometimes the fictional body does not map fluidly onto the actual body. And when it does not, attention is directed to the actor body as real.

This is a similar effect to that which I wrote about in the last post regarding autobiographical performance by an ensemble of actors with Down Syndrome. The real-world body speaks and by doing so contributes to our understanding of the character and of the play as a whole. In the case of Macbeth performed as male but by a body marked as female, an interesting thing happened. And not I suspect what anyone including the director predicted. First, I want to pause on how gender markers are distributed in the production. Tess as an actor body is biologically female. In her role as Macbeth, choices pertaining to costume and hair were made to communicate toughness or aggressiveness (denims and leather, metallic accents, chains and belts, a sword), and practicality/protection (sturdy fabrics, long sleeves, pants, boots, hair pulled back from the face in tight braids, half-gloves). Do these choices frame the body as male? Makeup choices featured strong eyeliner with a cat-eye swoop on the lid and red (really red) lipstick. For me it is all about the lipstick. The lipstick made it impossible to ignore the female of Macbeth. (The female of Tess? Where does the female reside here? Who is wearing lipstick? Tess or Macbeth?)

Then the neat thing happened….I have read, studied, seen and worked on many productions of Macbeth. I can practically sing along. But something that I only noticed in this production is that the whole play seems to be a mediation on what is means to “be a man.” The characters seem to be continually saying to each other ‘be a man,’ OR ‘be manly,’ OR ‘take it like a man,’ OR even the female characters say ‘if I were a man.’ (In the interests of brevity I won’t drag out all the citations here). It was fascinating because each time a character made reference to manly attributes or behaviours, I received a jolt to recall to perception that the speaking body was NOT a man. What does it mean to disport oneself as man when one is wearing red lipstick and seems to be at some level a female? Ultimately, this Macbeth (for me) is a meditation on masculinity. Ironically, in spite of its equal opportunity feminist casting ideals, it is not about women at all.

One response to “Red Lipstick Macbeth and Masculinity”