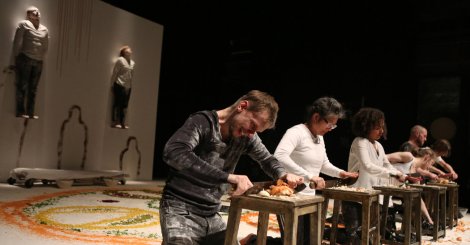 Last Sunday I had the chance to watch Belarus Free Theatre‘s performance of Trash Cuisine at LaMama in New York via livestreaming on HowlroundTV  (Archived temporarily? here). Disingenuously framed as a tour of exotic global cuisine, the performance is instead a tour of institutionalized murder — torture, execution, and genocide. In each scene, food is linked to acts of horrific, intimate violence. A man is waterboarded with water from a kettle. Two executioners compare working conditions while dining on strawberries and cream. Naked prisoners are humiliated with pineapples stacked on their contorted bodies. And so on. The devising work here is elegant and powerful. (It is brilliant. Do watch it.)

Two particular moments stood out for me in their use of the real to communicate the full horror of the documentary accounts. In the first, a performer takes centre stage holding a microphone, awkwardly she asks us how we are tonight. She tells us that she has been practicing some impressions and would like to share them with us. Her first impression is “the gas chamber” (a long slow hissing sound), followed by beheading and stoning (which I won’t describe). These are gruesome in their not-funny-ness. For her finale, we get her ‘favourite’ — the electric chair. Taking a deep breath, she starts to scream. She screams and screams while a large screen upstage counts down 60 seconds. An electric sustain pedal under her foot loops the screaming while she breathes between screams. It is unremittingly loud and painful to the ears. After the first 60 seconds, there is silence for 10 seconds counted down by a black and white film counter. Then back to 60 and another minute of ear-splitting screaming. On one perceptual channel, the screaming is representational, evoking what we imagine to be the feeling of a coursing high voltage electric current. On another channel however, these two things are strongly detached. The ‘fictional’ image of the electric chair is separated from the screaming which is decidedly ‘actual.’ We can see her screaming, we see the microphone and the pedal. The countdown clock makes this a durational experience for my real body. The screaming is both analogy and also just raw screaming. Apart from representation, the obviousness of the performance of ‘real’ screaming connects me to the horrors of execution but through a different journey.

The other example occurs in the final scene (shown above), when six of the eight performers approach the front of the stage each carrying a flat-topped wooden stool, a large machete knife or cleaver and a black plastic bag. After the previous hour, these props radiate menace. Kneeling down, each performer pulls a large onion from the bag and chops it vigorously and speedily. When an onion is completely chopped, it is swept forcefully off the stool-chopping board and into the audience. A new onion is drawn from the bag. This goes on for several minutes. Each performer probably chops about a dozen onions. Inevitably, as this goes on, the performers become red-eyed and red-faced, their faces streaming with tears.

What moves me about this moment is the juxtaposition and simultaneously the separation of the elements at work here. At a foundational level, food is again aligned with torture as onions are shrouded in black plastic and assaulted with knives that are more weapon than kitchen utensil. The dichotomy of the knife here speaks loud. Then, the sulfuric acid created by the onion enzymes is also a kind of food torture. We are actually hurt by this food. But most potently from a performance point of view, there is a strong separation between the uncontrollably, grossly weeping performers and the narrative content of the stories they have been telling. It is not that the tears are ‘real’ but that their obvious motivation is an actual-world object, neutral and detached. The performers do not cry in sympathy with their ‘characters.’ Crying does not connect through analogy. The shredding emotional impact of the stories live in worldB but the crying lives in worldA. Being made to cry by onions is non-emotional. It is matter of fact. It is objective. It just happens due to chemistry. And yet, as a direct result of this disconnect, the effect is even more potent. We read across the gap from the superficiality of these tears back into the testimony we have witnessed. The gap short circuits the easy emotion — the erotics of injury that Julie Salverson so astutely writes about — while at the same time making the connection at a higher, more complex level.

I am interested in this mode of theatrical communication that dispenses with the usual routes of representation (any kind of representation from highly naturalistic through decidedly stylized) and instead substitutes pure performance, that is, just doing something. Not pretending, just doing. The cognitive, emotional experience for the audience is completely different. And in this particular case, a smart, potent choice for speaking stories that verge on the unspeakable.