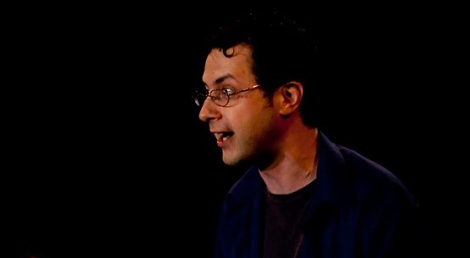 Autobiographical solo performer TJ Dawe exemplifies this question of where we find acting (as opposed to not-acting) — in the audience perceptual frame or in some work done by the performer, or some combination of both.

Searching though the literature for theoretical insight into the phenomena of non-actors, I found an article by Michael Kirby, entitled “On Acting and Not-Acting, first published in 1972 in TDR and reprinted in Philip B. Zarrilli’s The Actor (Re)Considered (Routledge 1995).

In laying out his model, Kirby initially asserts is that there is not a simple dichotomy of acting and not-acting but rather a continuum with several key points on the line. At one end, are those who participate in a performance but do not act. Kirby gives the example of wardrobe attendants who appear on the stage to help the actors remove or change costumes. I imagine that we can also place in this category stagehands or other kinds of scenery movers and puppeteers. Since these performers do not present roles other than themselves and are not indicated by costume or gesture or stage placement to be to be part of some factionalized world, they are, what Kirby calls ‘non-matrixed’ and so are not actors (41).

The next step on the continuum are performers who participate in a ‘symbolized matrix.’ Kirby gives the example of a performer who limps, not because she is pretending to limp, but because there is a stick tied to her leg. He notes that when the matrices are “weak, intermittent, or non-existent” we see a person and not an actor; however, when the matrices are “strong, persistent, and reinforce each other, we see an actor, no matter how ordinary the behaviour” (42). Here Kirby seems to suggest that acting is an audience perception encouraged by situational matrices like gesture, appearance, and movement, as well as context. If I am given sufficient encouragement, the person with a limp is Oedipus.

Translating this idea then to my comfortable ontological terminology of worldA, B, C, etc., opens up an odd ambiguity. The idea that sufficient cues emanating from the stage triggers the transposition of a worldA body into a worldB character makes sense to me. This is consistent with the priority placed on audience creation of fictional worlds through applied theatricality as we shift worldA material into worldB fictions. The problem (a small one?) is that Kirby uses the word ‘actor’ not character. To my mind, an actor is a worldA entity. Is Kirby conflating actor with character, such that the actor is a vehicle for the character? Or that being an actor is a precondition for creating a character? Or does actor simply equal character? Is this then a two-step process whereby certain matrices make the body an actor and then some actor effort — pretending — engenders the character?

I won’t summarize the whole of Kirby’s model now (although I might come back to it another day), but it is significant to note that at the opposite end of the spectrum, the acting end, Kirby does say that acting involves an emotional or psychic component on the part of the actor. The actor has an awareness of the audience as such and ‘pushes’ his or her emotions, heightening the temperature or intensity of that moment. This kind of basic awareness and pushing of emotions can be seen in non-fictional contexts, however — in public speaking for example.

Question: (so many questions…) To what extent is acting an audience perception of a fictionalizing context and to what extent can we have knowledge of the actor’s internal processes and intents? Where does this model leave autobiographical performers and other self-presenters? Also this model opens up questions about how the non-actor/actor is framed by other theatrical elements as acting or not-acting.

One response to “Acting and Non-Acting part 1”