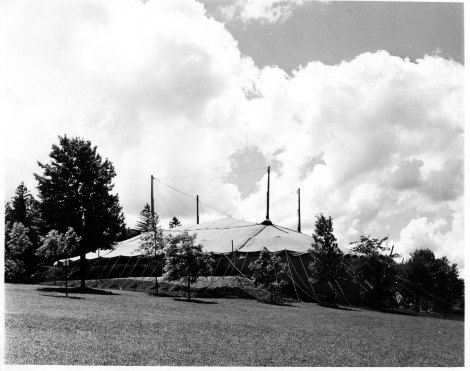 I dropped in at the Stratford Festival 60th season exhibit on Downie Street yesterday morning. The conviction that museums and similar archival exhibits are a perfect example of our attraction to the real object grows. Museums present a special but common case of objects taken out their real world context and presented for our — what? — for our appreciation? delectation? consumption? as real. The power of the museum object would be entirely lost if the object is known to be a replica. A core function of the museum situation is to certify the objects as authentic. One reason we visit museums is to be in the presence of the real and by doing so make some kind of connection to the object’s original moment. (Cool! A really old thing that was actually there when…)
I can appreciate the beauty of the object. I can appreciate the craftsmanship. But standing in front of the objects in their glass case and behind their velvet ropes, my primary experience is imaginative, transporting the object in thought back to its “moment in the spotlight” (what shall we call that?). Back to the moment of its historical performance, when it was held by such and such an actor in such and such a performance. (Significantly, the compelling moment does not place the object in other locations in its existence — being built or sewn in the shop, stored backstage in an anticipation of performance, or relegated back to storage for the intervening decades…why not?)
It also strikes me as interesting surveying the choice of objects displayed here. What as been selected? Costumes, yes. But also a significant number of masks, hats, and iconic hand props. (There are photos also but a photograph is a different kind of documentary object entirely. It is an indexical record of the moment but is itself not a participant in that moment…Unless we become interested in the real presence of the camera and the film stock? Even then, the photographic print exhibited is a second-order impression of the historical event.) Do these intimate objects have a stronger attachment to their social history than say elements of the set, pages from the prompt script, or old lighting instruments?
One particular artifact in the exhibit doubles this bridging to the real. There is a 1957 card mailed out presumably to Festival patrons. The card has attached to it a small rectangle of grey canvas. The message on the card identifies the scrap as a piece of the original Festival rent first erected in 1954, dismantled for the final time in 1956, and to be replaced with a permanent building in 1957. All the value in this grey scrap inheres in its provenance as part of that famous structure. Then in the exhibit the “spotlight” moment is doubled as we connect with the 1954 tent and also with the1957 recipients of that card. (This is why people collect celebrity paraphernalia — invariably the object itself has no utility; all its value rests in its history.)
It occurs to me that the documentary theatre is exactly a museum in this way. Some appeal of verbatim or autobiography or even site-specific performance lies in the contact with the original situation. That bridge may be longer or shorter depending on the distance of here/now from the “spotlight” moment or moment of “capture” in the case of verbatim, but it remains ineffaceable.
Question: Are there real staged objects for which provenance is not the main attractor? (what about the egg in Seeds?) Can historical objects exert force and affect in other ways or along other trajectories?