To evaluate the authenticity of your business offering, James Gilmore and B. Joseph Pine, authors of Authenticity: What Consumers Really Want  (mentioned in the previous post), suggest taking the Polonius Test. Famously in Hamlet, Polonius imparts fatherly wisdom, cliche after cliche, to his departing son Laertes. The most durable of these gems being: “This above all, — to thine own self be true; And it must follow, as the night they day, Thou canst not then be false to any man” (1.3.80-82). Gilmore and Pine tease this out into two key questions for rendering authenticity for any good, service, or experience. “Is the offering true to itself?” and “Is the offering what it says it is?” There are four possible combinations of resultant answers — Real-Real, Real-Fake, Fake-Real, and Fake-Fake. 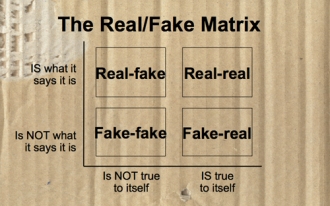 So now what about theatre as an experiential “offering”? Where does it fall on the matrix according to the Polonius Test? I would argue that theatre is in these terms Fake-Real. Is it what it says it is? No. The story presented for our consumption is clearly a fiction. The emotional issues or intellectual conundrums that we are invited to engaged with are entirely fake. Is it true to itself? Yes. Even through the fake content, theatre offers a real experience, presenting the audience with pleasure and real insight and potential for real-world transformation. As a business model, there is nothing wrong with being a Fake-Real, as long as you do it well. Theatre does all the things that Gilmore and Pine recommend; most notably creating belief in the fabrication. (A meticulous fabrication not a fake). “People put aside what it actually is — inauthentic — to believe what it says it is” (109).

Now next step…what happens when the “fake” elements of theatre are replaced with real ones? When the fabrication is not a fabrication but the original thing itself, then does theatre become a Real-Real? Yes, I think it does. According to Gilmore and Pine, as experiences become more customized, more authentic, they move beyond experiences to become “transformations.” Transformations are defined as “effectual outcomes that guide customers to change some dimension of self…calling human beings to a higher goal and providing a foretaste of a better way” (47, 50). This then is the highest kind of offering.  In terms of the potential for this kind of activist performance model, I think that yes, this is what Real-Real theatre is capable of.

Question: How is the Real-Real theatre as defined in this way compatible with (or not) Jill Dolan’s concept of utopian performatives which are also premised on a real-real synergy.?

4 responses to “The Polonius Test”